ASA Treasurer, Pauline Greenlick, visited Uganda this past June. She shares about her experience meeting one of the many Hidden Peoples ASA is striving to help.

Our van was parked at the top of the road. The rain stopped but the road below us was a sea of orange mud. The driver was young, all of 18. But experienced. All Uganda drivers have to know how to drive on the Uganda dirt roads. He claimed the road down the hill was impassable. We believed him. Orange mud, 2 foot deep ruts, deep pools of rainwater hiding even deeper ruts. There were 5 of us in the van, including the driver: myself, a psychologist, an intern from the University of Pittsburgh, and Yeko, a disabled man who runs another local nonprofit.  We all took in a huge breath of resignation and we had to figure out how we would get down this hill of mud and water.

I told them the woman’s story the other day. The woman who was waiting for us at the bottom of the hill. They wanted to meet her too. The van doors opened and the two young woman moved quickly. Down the hill. I waited until Yeko painfully got out of the car. The driver helped him. One of his legs is shriveled and he walks unevenly. His back is bent too. I thought I would walk behind him. To hold him up? What if he falls? Into the mud? Into a rut? I offered to support him, but he said he was ok.

She sat there in a plastic white chair, there were additional plastic chairs around her. Empty, waiting for us too. We greeted her, she smiled, we sat down in a semi- circle. Surrounding her. I see her shriveled toes peeking out from under her long dress, her toes bent backwards and under her foot, her shriveled and bent hand and fingers bent under like a backward claw laying on her lap. For the first time, I noticed her shriveled arm and leg, there was no muscle to support the bone. Just bone, a thin bone. She smiled at me. We could only communicate with smiles and gestures. She doesn’t speak English. She is Muslim, her veil gently covers her head. Her smile reveals only a few teeth. She wears a pretty patterned skirt, long to cover her legs, modestly covering her painfully thin and frail body. 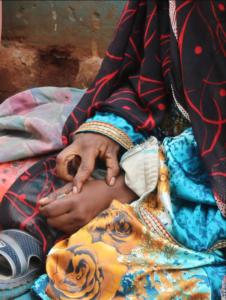 I worried that she would have her hopes up too high when we said we would come. I repeated the day before that we were there for emotional support only. We could not promise anything else. We all knew her story before we entered that room. That is why we needed to get to the bottom of the hill and meet her. I told them she lives in Katwe Slums, the filthiest slums in Kampala. I told them how she was raped for over10 years.

Medi cared. He is the man who was with us that day. He runs a school for the street children from Katwe. He met her in Katwe and told me she needed help. Her 5 children needed help. What could we do? I sat there looking at her, the other 2 women did too.

We were all silent until Yeko spoke and offered her words of support. Told her his challenges and struggles as a disabled man and how he was hidden too from society. She started to smile. He took her hand, looked at it and we figured she had been stricken by polio. She said she was crippled her entire life.

Yeko asked about her arm and leg. He said he believed she had polio. He shared the time he got polio. He showed her his leg. He shared how hard it was to be disabled in Uganda. He shared how difficult it was to get an education and earn a living. As he talked, her smile grew broader and she lifted her head up and started to talk with him in her language. 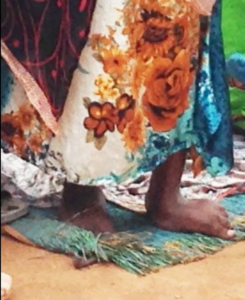 For a long time, she was silent. I asked what can we do to help. Medi talked about something – a ridge, a bridge. I asked again what is what he said and he replied, a ridge, a bridge. I finally asked him to draw it. Oh a Bridge I said. Where would this go. He said a bridge could be built over the water trenches you see everywhere in Katwe. They are actually open sewers. They are about 5 – 10 feet wide and course through Katwe like an open stream of filth. She could set up her store and sell packaged food items to people who need to cross the bridge.

So this is how I can help her, just one of the millions of hidden people in Uganda. We would raise funds through our non-profit ASA Social Fund for Hidden Peoples. Medi said she would need $1000 to have the bridge built and buy enough capital to stock her store on the bridge.

We left the woman with a plan. But before I left, I quietly slipped behind and talked with Medi. What does she need right now, I asked. Money for her children. Through ASA Social Fund for Hidden Peoples Emergency Fund, we donated enough to buy 3 beds, some clothes, blankets, and school supplies so they can stay with him in his school. The rain had long ago stopped and the mud hill dried up leaving only gaping ruts and potholes. Our driver had somehow eased down the hill and we easily climbed in this time. We left the woman with a tiny ray of hope. Maybe.

Time has passed. Months. I am back in the US. I asked about the woman. Medi said on Whats App, she is very sick. He said she is extremely malnourished and needs emergency medical care. ASA supported her through a second grant from our emergency fund: money to save her life. So right now we are helping her stay alive, her bridge will have to wait for another time in the future. 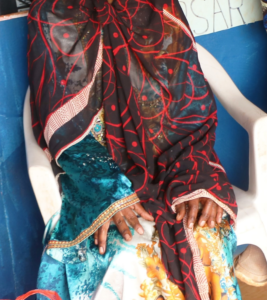